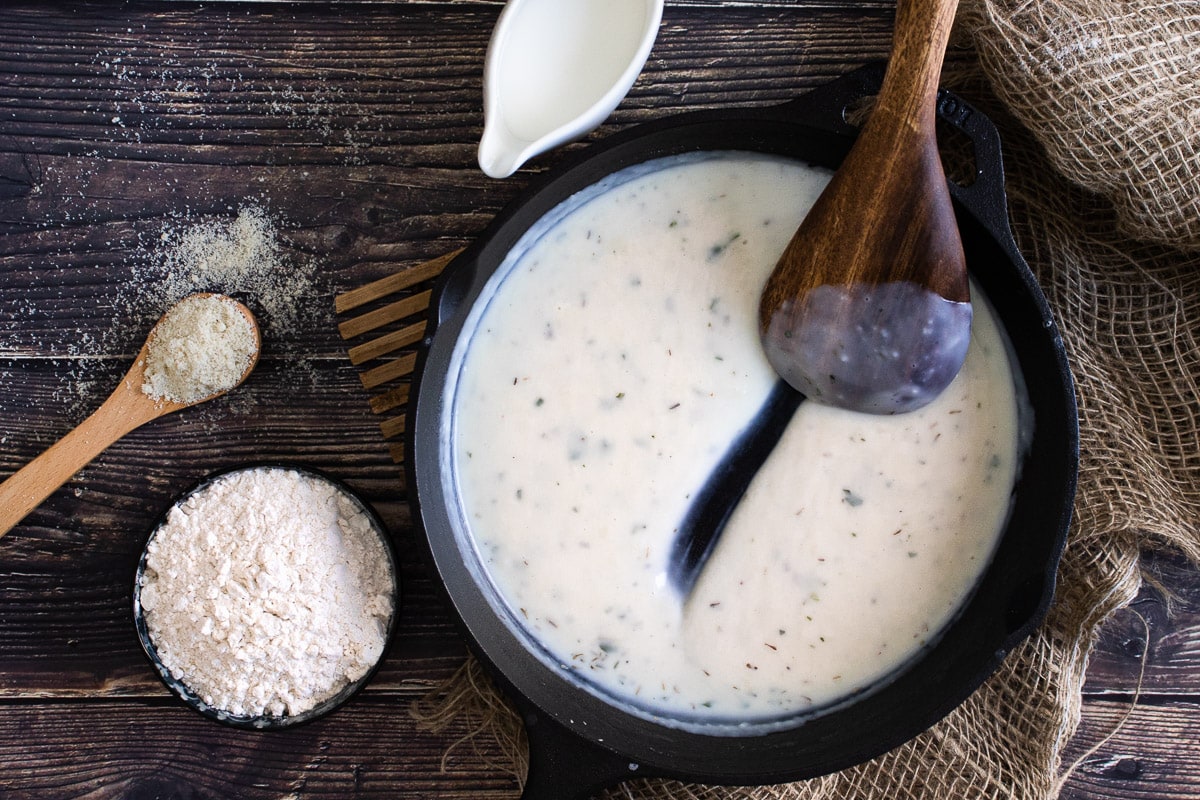 Got a great dish on the go that is looking a bit thin and lacklustre? Read on to find out how to thicken sauces including the pros, cons and typical applications for each method.

The list below outlines a few of the most popular methods for thickening sauces, roughly in order of popularity. Therefore, the techniques higher on the list tend to be easier, simpler or use more commonplace ingredients, hence their higher adoption rate.

Here is a summary of the different methods, with links so you can jump to exactly what you need!

The Most Popular Ways to Thicken Sauces

1. Reduce the sauce with heat

When to do that

A simple method of thickening a sauce is to simply boil it to allow some of the liquid to evaporate. You don’t need any extra ingredients, and it usually involves no extra washing up providing you have the pan already simmering on the hob/stove.

How to do it

If you have any pieces of meat or veg which are perfectly cooked in the sauce then remove them first to stop them from potentially overcooking.

Increase the heat to the pan and let it simmer or lightly boil until the sauce has reduced down to the thickness you want. This is best done on a hob/stove rather than in the oven, because of the concentrated heat.

For a full guide on how to use cornflour see this article.

Cornflour is finely ground flour made from maize/corn. It’s simple and easy to use (if you follow the directions) and works great for thickening sauces.

It is often said to be flavourless, although it definitely does have a discernable taste which you may be able to detect a little in the recipe. However, as its flavour is mild it is a great choice for gravies, soups and sauces and more.

Cornflour does turn sauce a bit cloudy so it’s not great to use in translucent sauces or liquids.

Mix the cornflour with 1 part flour to 1 part cold water until fully combined. This makes a slurry. For every 250ml (1 cup) of sauce to thicken you need around 1 tbsp of cornflour.

Gently whisk the cornflour slurry into the sauce slowly. Once added bring the dish to a simmer and cook for a few minutes. Without the heat, the thickening agents won’t work. When using cornflour to thicken sauces it holds very well at high temperatures too meaning you can boil it for a longer period of time than some other methods (although overdoing the sauce for a prolonged period of time may cause it to start to loosen up)

See here for a full guide on how to use a roux.

A roux is a classic cooking method and it is the base of many famous sauces such as bechamel. It is great for thickening sauces and uses simple ingredients you will probably already have to hand. You’ll need flour and butter (or an alternative type of fat).

It is great for sauces and gravies, although nothing clear as it gives a very cloudy finish to the liquid and adds more body than some other methods. Typically when you use a roux you create the roux in a pan and then add the sauce to the roux. Therefore, it’s not the quickest method if you want to quickly thicken a sauce you already have ready.

Take equal weights (not volumes) of flour and butter. Melt the butter in a saucepan and then whisk in the flour. Cook for 2-3 minutes to remove the raw taste of the flour and then start to add the sauce a little at a time.

For every 500ml of sauce to thicken use 25g each of flour and butter.

You can also make different colours of roux depending on the sauce you are making but a quick and simple white roux is great for most uses. If you are making it for gravy or something dark then you may want to make a dark roux, however.

You can also make a roux in advance and keep it in the fridge for up to 3 months or the freezer for up to 1 year. Then can just spoon out what you need when you need it.

Flour is a great way to thicken sauces as mentioned above. However, using it on its own is tricky. If you add it straight to sauces then it will clump up and cause lumps. It will also cause the sauce to taste of raw flour unless you cook it for a decent period of time. This is why a roux is commonly used which cooks the raw flour taste out before adding the sauce.

If you are planning in advance, however, you can use flour early on in the cooking process effectively.

To use straight flour successfully to thicken sauces you can dust it over meat or vegetables when pre-cooking or sealing them for a casserole or stew. In effect, this is following the same principles as a roux as the flour mixes with the fat from the pan or the meat as it cooks before adding further ingredients. You can also add it to the roasting pan after cooking meat to combine with the roasting juices as the base of a gravy.

Arrowroot is used in a very similar way to cornflour to thicken sauces so it has a lot of the same benefits – it is quick, easy and simple. It is also gluten-free.

However, unlike cornflour, it has no flavour so you don’t need to worry about it affecting the taste of the recipe. It also won’t add any cloudiness to the sauce. Depending on what you are using it in that may be a good or a bad thing. For example, in gravy, you will want that extra opacity and body in the appearance of the sauce, which may not make arrowroot the best choice.

Because of the above, arrowroot is most commonly used in fruity sauces and desserts.

Use around 2 tsp for every 250ml of liquid you want to thicken. Mix the arrowroot powder with an equal amount of water until fully combined and then pour it into the sauce and stir to incorporate.

Arrowroot does not stand up well to heat, so you should add it at the end of cooking and heat it for only 1-2 minutes or else it may start to thin out.

A burre manié manié works very much in the same way as a roux and uses the exact same ingredients. While the results will be very similar, the execution is quite different. It is a great alternative to a roux if you are making a soup or stew where you have already got the dish prepared and you don’t want the step of pouring it into a pan with a roux. Basically, you add it towards the end of the cooking rather than at the beginning.

Mix together flour and room temperature butter in a small bowl until fully combined. As with a roux, you’ll need around 25g of each to thicken 500ml / 2 cups of liquid.

Add the burre manié to the hot liquid and whisk or stir until the sauce has thickened. If you have any large pieces of meat in the sauce then you may want to remove them first to stop the stirring from breaking the tender meat apart and also to allow you to evenly mix it through.

Once you whisked in the burre manié then let the liquid simmer for at least 5 minutes to get rid of any raw flour flavour.

This is great if you are gluten-free or want a low-carb option. It also gives a super smooth and silky result although it can be a little gloopy if you add too much. Additionally, unless you dissolve it in an oil or fat first, it can be a little tricky to get smooth.

A great thing about xanthan gum is that you don’t need any heat to activate its thickening powers, which makes it a great choice for cold sauces and dressings.

You only need a really small amount of xanthan gum to thicken sauces (be careful not to use too much or you will end up with a really slimy texture!)

If you are using the gum in an oil-based sauce then you can mix it with some oil first and it will dissolve very smoothly in fats and this will give the best result.

Now you know all about how to thicken sauces, why not try one of these recipes out? 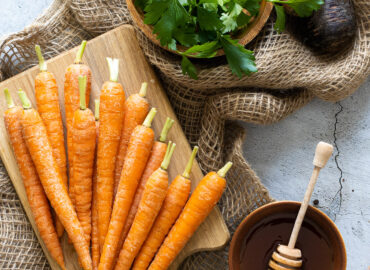 How to Freeze Carrots 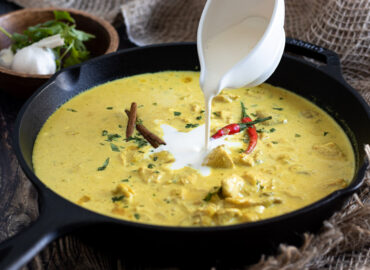 How to Thicken Curry 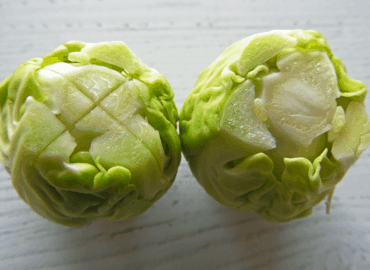 Do You Need To Cross Brussels Sprouts?