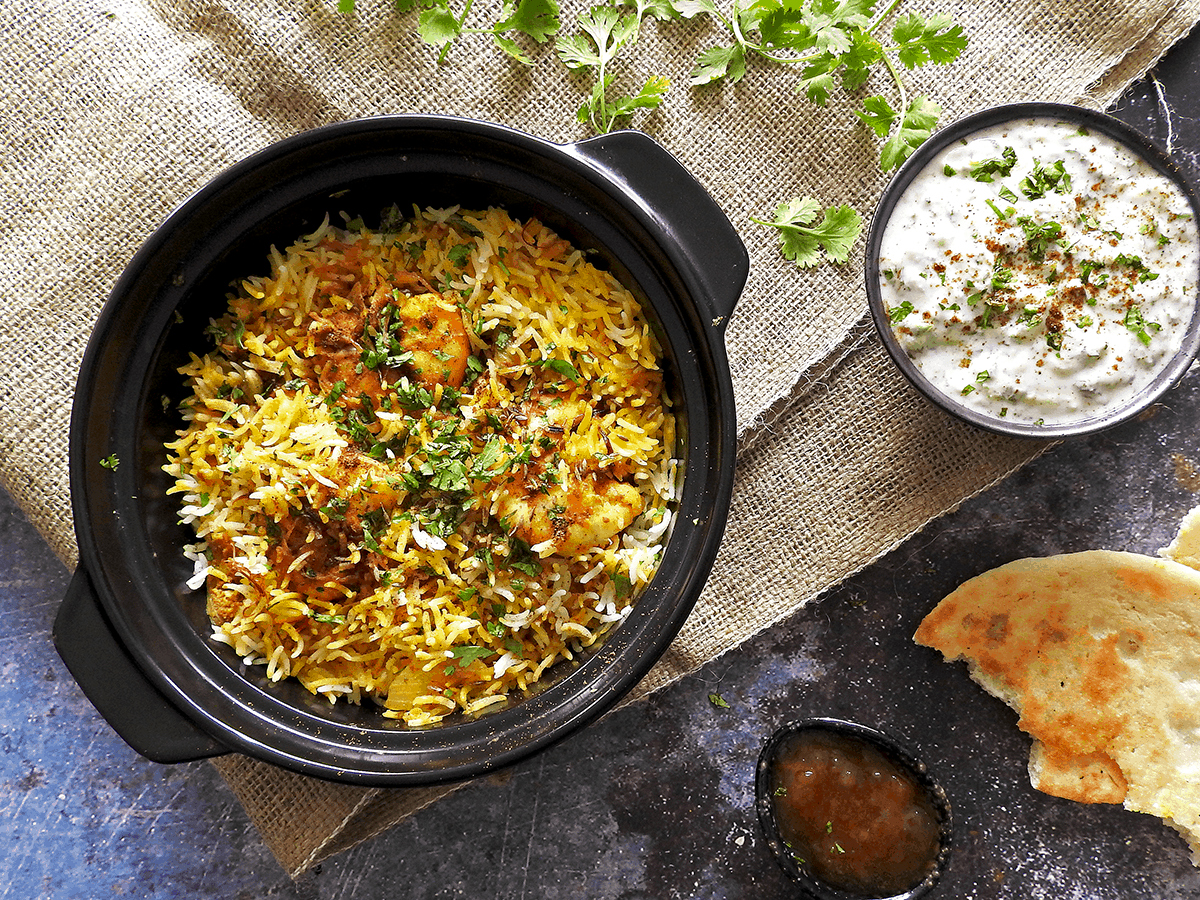 This king prawn biryani is the perfect weekend treat. It takes a little time to cook but the end result is so worth it! Plus it leaves your whole house smelling absolutely delicious! Don’t be put off by the number of ingredients – most of them are spices and there is actually only a small amount of prep or chopping involved.

Biryani is a rice-based dish which hails from India. Its popularity spread throughout the Middle East and it’s eaten widely in most countries across the Arabian peninsula. A lot of Arabic countries also have a local traditional dish which holds stark similarities – such as Machboos from Saudi Arabia (or Kabsa as it’s often called). While they have a different flavour profile, the staples of rice and meat are consistent.

There are a lot of different variations on the humble biryani, using different flavours, meat and spices. This recipe combines a great mix of Indian spices with basmati rice and tender prawns.

Firstly, prepare everything. Marinate the prawns in a spiced yoghurt mixture. Lightly (not fully) cook some basmati rice with some cardamon and bay leaves and fry some sliced onions until caramelised and brown.

Next, you can start to assemble the full dish. Lightly saute some onions until softened and then add the prawns. Cook for a few minutes before lowering the heat and topping with the crispy onions, rice and some saffron water. Lower the heat, cover and cook for 20 minutes. Spoon straight from the dish onto plates.

Can you reheat it?

Biryani can be kept in the fridge for up to 2 days and then reheated. It won’t be as good as fresh though – and the prawns maybe become a little tougher. Reheat in the microwave until piping hot. Rice is actually one of the most dangerous foods to reheat – so you need to make sure it is steaming all the way through.

This recipe is a beautiful blend of spices, juicy prawns and flavoursome rice and topped with rich saffron. The prawns are marinated first in a mixture of yoghurt combined with ginger, garlic, garam masala, cumin, curry powder, paprika and turmeric. The prawns are also cooked with some cinnamon for extra flavour. The rice is boiled together with cardamom and bay leaf and then everything is combined and cooked slowly over a low heat. Delicious!

How many calories does it have?

This recipe has around 750 calories. It’s probably more of an indulgent treat than an everyday meal, but if you serve it with raita made from low-fat natural yoghurt rather than heavy naan bread then it is a little more ‘healthy’. It is pretty heavy on the carbs with around 68g per portion.

Fun fact – in Saudi Arabia, where biryani is super popular, there was actually a call in the local press to urge people to stop eating so much biryani. However, I don’t want to put you off. Often rice is cooked in the middle east in butter or ghee – and often even with it drizzled over the top. This is a little healthier than that. Plus, everything in moderation as they say.

What can you serve it with?

Biryani is great served with some cooling mint and cucumber raita drizzled over. I also love a good dollop of mango chutney on the side. It’s commonly served with naan bread which is a good accompaniment – but be prepared for carb overload!

This dish is pretty versatile and you can make substitutions based on what you have in the cupboard. Some examples include:

Spices – use what you have on hand. Some other great additions include nutmeg, cloves, coriander, chilli powder or cayenne peppers. Swap them out as you like. Just be wary that some are much hotter than others, such as chilli powder and cayenne.

Chicken works well in this recipe. Simply brown the skin of some thigh or leg pieces in a hot pan for a few minutes, and then cook in the same way as outlined below. Breast meat can be used but the result will be a lot drier.

Are you a fan of Indian dishes? Check out this chicken and red lentil curry, or this healthy chicken korma.

Products that work great for this recipe: 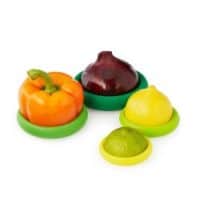 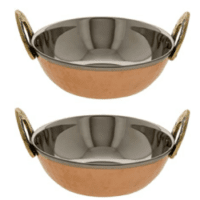 This king prawn biryani is flavoursome, fragrant and delicious. Tender prawns with warming spices. Serve with some cooling yoghurt and mint raita spooned over the top!

To cook the prawns

For the saffron water

For the crispy onions 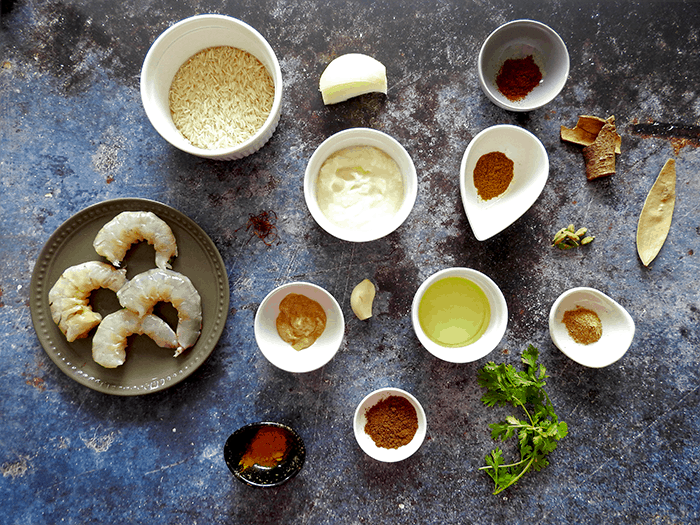 1. First, prepare the marinade ingredients and add the prawns. In a separate small bowl, add the saffron to the water. Leave both while you prepare everything else – the longer the better to allow things to infuse. 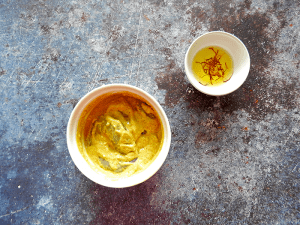 2. In a small pan add the oil for the crispy onions over medium-high heat. When hot add the onions and cook for around 5 minutes – until dark brown (but not black). The oil should be hot enough so that when you add the onions they hiss and splutter a little but the oil shouldn’t be smoking. See note 1 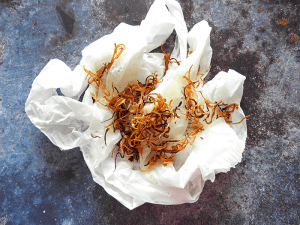 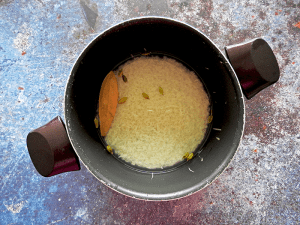 4. In a medium to large pan (depending on how many portions you are making) heat the oil over medium-high heat. Add the uncooked onion and cook for around 3-4 minutes until softened. 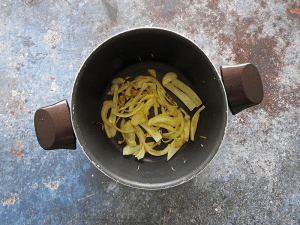 5. Add the prawns to the pan with the marinade. Cook for 3 minutes. 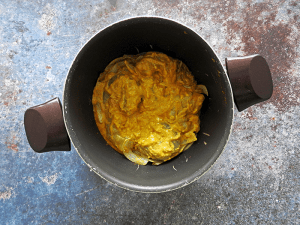 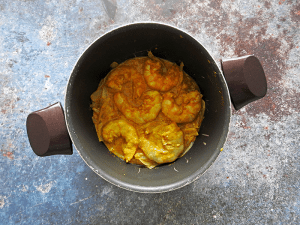 6. Reduce the heat on the pan to low. Top the prawn mix with the fried onions and half the coriander. Spoon the rice over the top and drizzle over the saffron water. Cover and cook for 20 minutes. 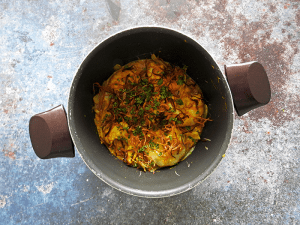 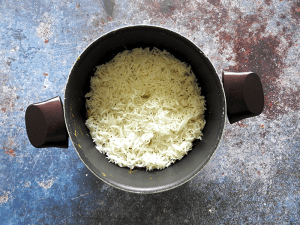 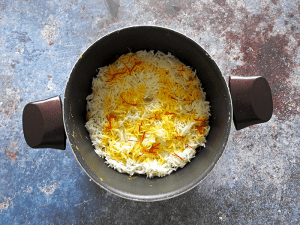 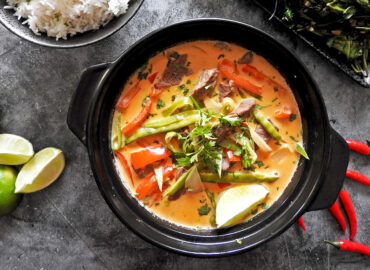 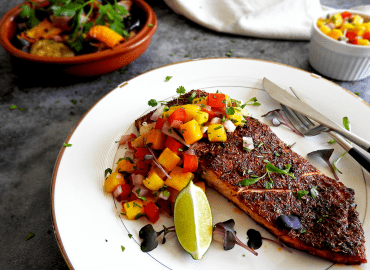 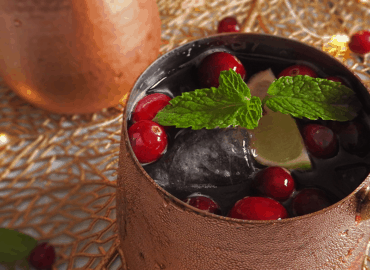