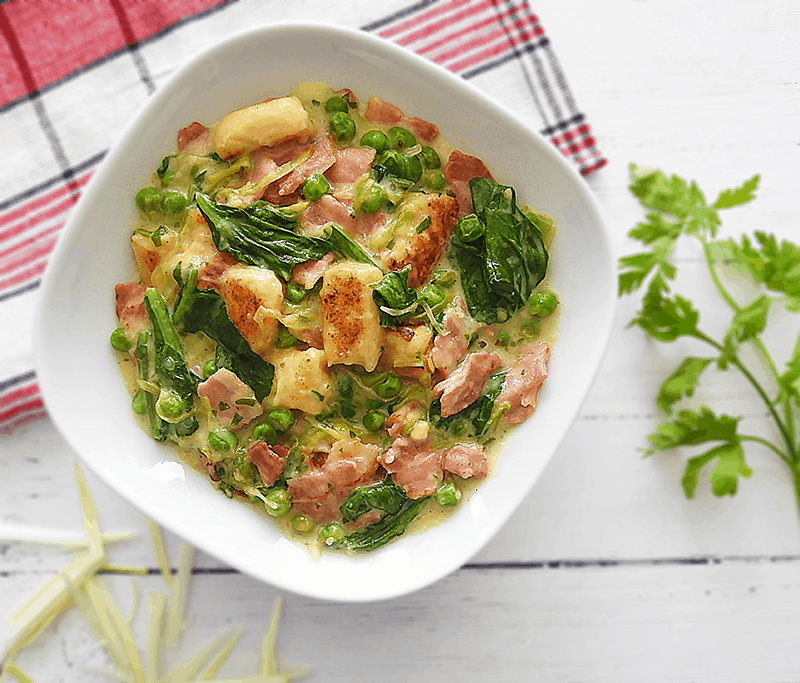 First up, the sauce in this Gnocchi with Creamy Bacon Sauce is actually semi low fat. It’s a twist on a typical Alfredo sauce, but using milk and low fat natural yogurt instead of cream. So while it might look like 10,000 calories in a dish, it actually comes in at under 600. Indulgence you don’t need to feel too bad about!

This recipe also serves up 3 different portions of green veg – peas, leeks and spinach. That definitely helps to undo some of the guilt from the Parmesan cheese and bacon! You could definitely substitute the bacon for more greens if you wanted a vegetarian option too.

I decided that I was going to have a go at making gnocchi from scratch. After a little research it sounded fairly straightforward. I mean, it only has 3 ingredients! As it’s a totally freezable dish I planned to make a batch, freeze individual portions and then enjoy over the next few weeks. Was I successful in my mission? Kind of. I will be posting my successful attempt in the coming week or so and will link to it here. I can tell you that the gnocchi you see in the pictures is my own homemade recipe :).

You can make this recipe with ready made or home made gnocchi depending on how adventurous you feel / how much energy you have / how much time you have spare to spend cooking. To be honest, I don’t think that the sacrifice of time to make gnocchi from scratch is a good enough trade off for using ready made if you are a busy person and time is a valuable commodity for you. Either way, this is a super delicious recipe – try it and let me know how you find it.

Soft and tender gnocchi combined with smoky bacon and sauteed vegetables are mixed with a light yet creamy parsley and Parmesan sauce. The ultimate comfort food – yet under 600 calories! 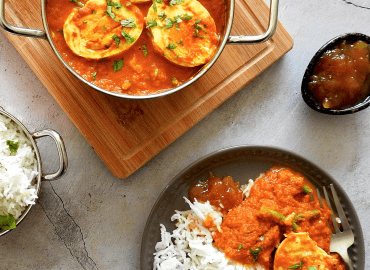 One Thought on “Gnocchi With Creamy Bacon Sauce”